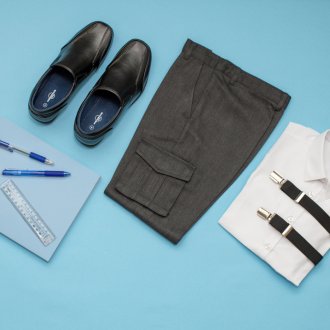 How much are you spending on back to school essentials? We’ve been crunching the numbers and have discovered that in 2020, back to school uniform costs will total £235 per child, on average, and the yearly expenditure soon adds up.... more >>

Exclusive Handbag Collection It’s finally here, the Kendall and Kylie exclusive handbag collection only available at Deichmann. The Jenner sisters have done it again with these gorgeous on trend designs. We are obsessed with these styles, perfect for the spring/summer... more >>

“It’s the most wonderful time of the year” Stocking Fillers for under £20 And so the countdown begins, with Christmas lists growing and the shopping in full flow, we’ve created a Christmas Gift Guide to help you along the way.... more >>

Keep their little feet happy with our back to school range.   With plenty of choice around when it comes to school shoes, we want you to know why we are unbeatable both in value and quality. This year we... more >>

We are throwing it back to Coachella for some festival outfit inspiration. We are checking out the hottest celeb styles from the music festival, from sneakers to sliders we’ve got you covered.    Let us know your favourite festival look... more >>

“And they lived happily ever after”. On Saturday 19th May 2018 Prince Harry and Ms Megan Markle made history and became the Duke and Duchess of Sussex, with a ceremony that captivated the nation and millions of others. We were... more >>

Need some summer style inspiration? We’ve got you covered, our insta babes are rocking the sneaker trend with looks you can take from the office to out out. Check out below for some lookspiration.   @missjoslin is channelling some serious... more >>

With Prince Harry’s and Meghan Markle’s magical day looming on us, we’ve got all the obvious questions on our minds… What kind of dress will Meghan wear? Who will design it? What will the cake look like? Our most important questions... more >>

In March, we launched our #The Street Is Yours campaign. We want you to create your own boundaries and own your look, whatever it may be! Our campaign includes all styles of shoes from trainers to heels which reflect this season’s... more >>