Where do you stand on age old debate of wearing shoes in the house? If you’re a dirt or germaphobe you might want to be careful whose house you visit, as our latest survey has highlighted a regional divide in attitudes to removing outdoor shoes in the house, with those in some locations more likely to than others.

We’ve discovered that people in Northern Ireland are most likely to wear their outdoor shoes in the house; 62% of respondents usually or sometimes wear their shoes indoors, followed by 48% in the North East and 47% in Wales.

The data is based on a Deichmann survey of 4,691 UK adults, who were quizzed about their shoe wearing habits. Overall, 17.7% of people regularly wear their shoes in the house, while 25.5% sometimes do.

For convenience, due to habit and for comfort were the most common reasons cited for wearing shoes in the house.

If you’re reading this at home in London, the East Midlands or Yorkshire & Humber, you’re more likely to have left your shoes at the door.

Just 37% of those in London, 38% in the East Midlands and 40% in Yorkshire and the Humber usually or sometimes wear their shoes in the house.

The top three reasons for removing shoes in the house are for changing into slippers or indoor shoes, for religious or cultural reasons and to avoid bringing dirt of germs inside. 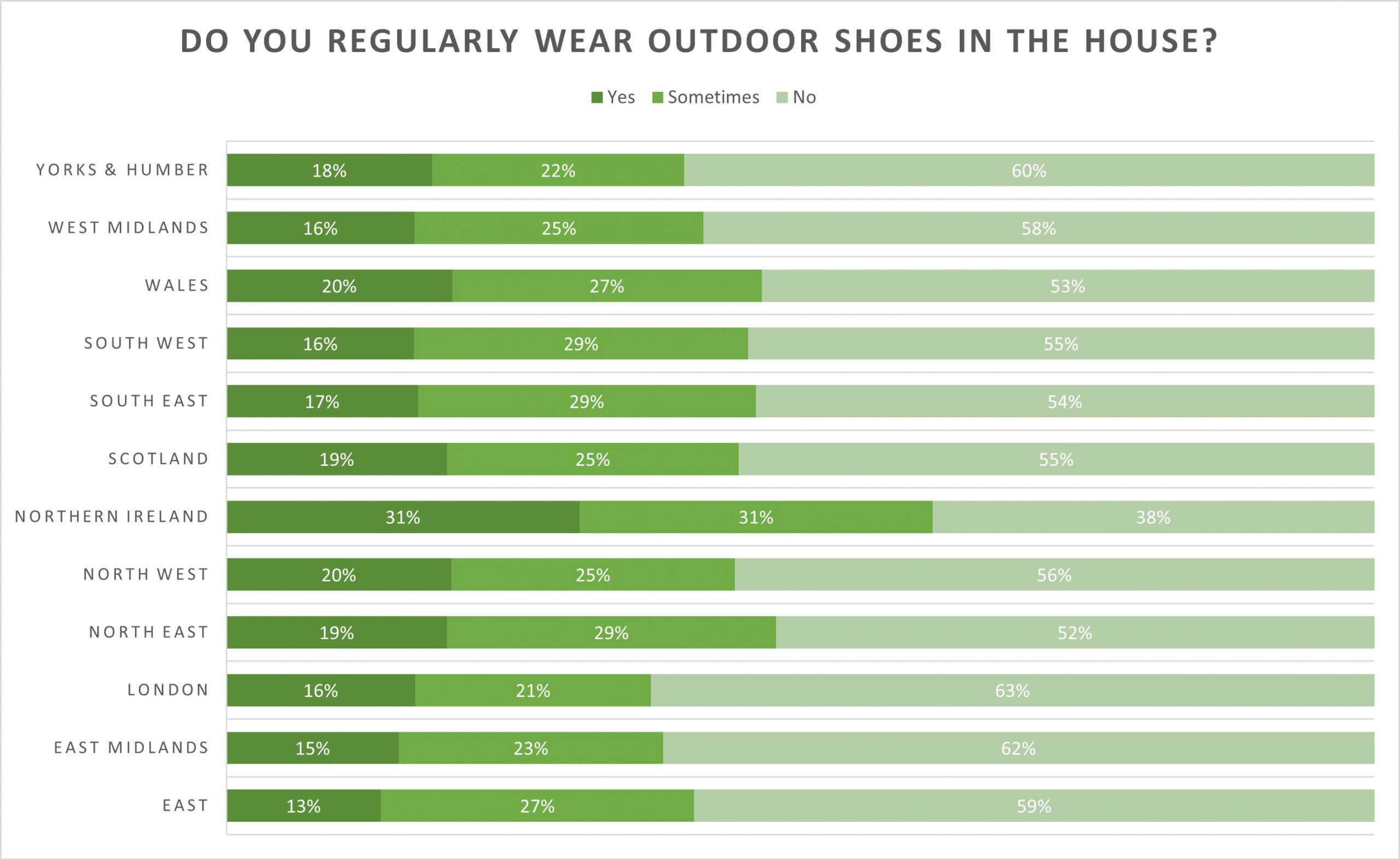 Why you should never wear shoes in the house

Our survey respondents were informed that research from the University of Arizona found the average shoe to have 421,000 units of bacteria on the outside – more than the average toilet. Worryingly, when asked if this information would put them off wearing shoes in the house in the future, 15% said no and 17% said maybe.

Regionally, there was also a split with nearly a fifth of North East adults unphased by the revelation; 19% responded no and 18% said maybe. Scots came in a close second, with 18% saying they weren’t put off and 16% responding maybe.

But what does the science say? If you’re squeamish, we recommend you look away now!

The University of Arizona study identified coliforms – a type of bacteria found in the digestive tracts and waste of humans and animals that is known to cause infections, meningitis and pneumonia – on 96% of the shoes tested.

Not only were bacteria found on almost all of the footwear, but further research found bacteria transfer from shoes to uncontaminated tiles occurred in over 90% of tests.

The good news is that washing shoes resulted in a 99% reduction in the presence of bacteria, so you might want to ensure a regular shoe clean if you plan to continue wearing them in the house. Pick up our cleaning foam for a quick and easy clean on all types of shoe. 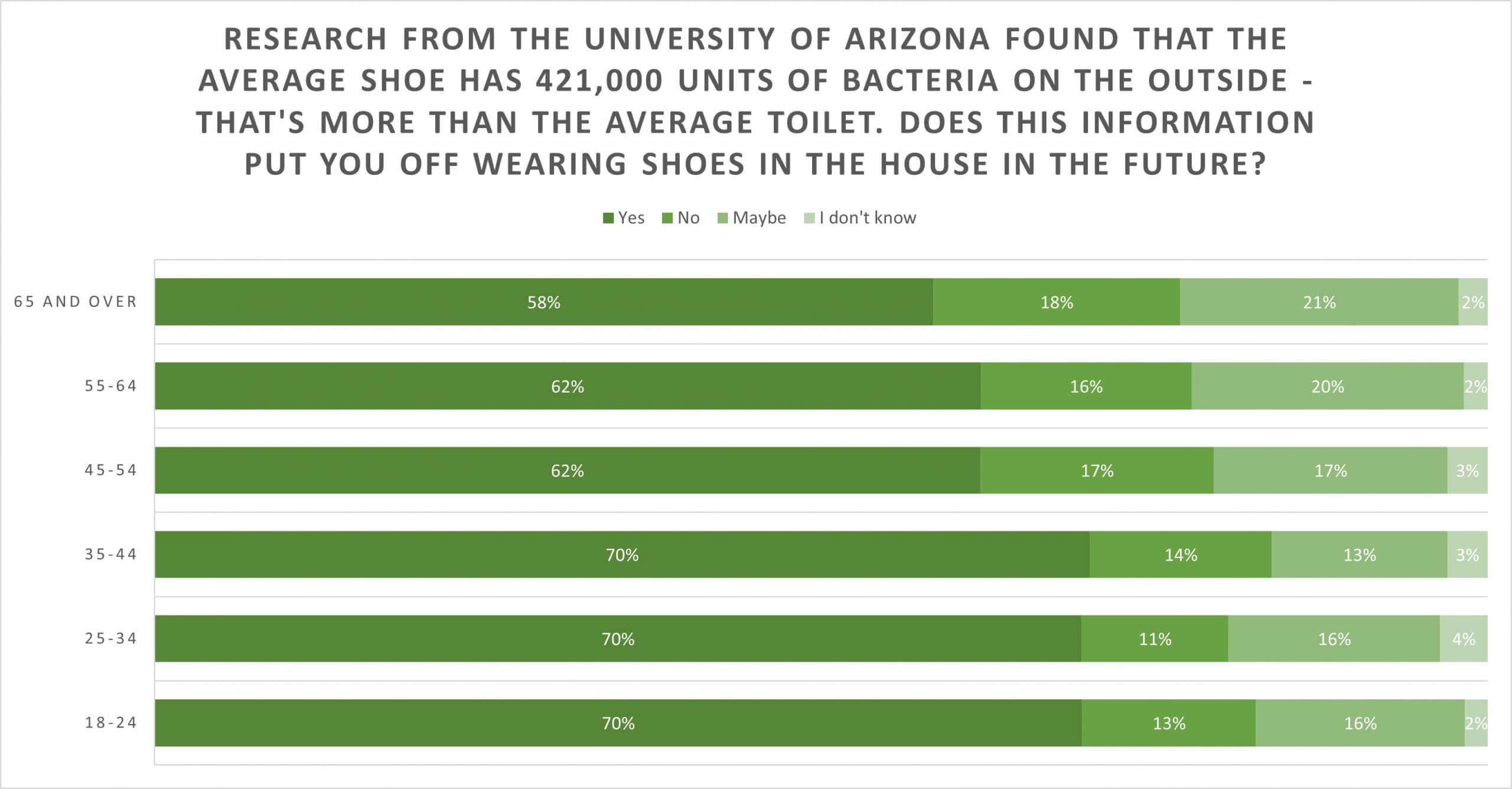 Which age group IS most likely to wear shoes in the house?

Our data has highlighted differing attitudes to wearing shoes inside depending on age. Gen Z are most likely to wear their shoes in the house, with 48% of respondents in the 18-24 year old category usually or sometimes wearing their outdoor shoes, followed by 46% of Gen X (45-54 year olds).

Those least likely to wear shoes in the house are 35-44 year olds, only 39% regularly or sometimes do. The majority cite convenience as the main reason for wearing shoes inside. 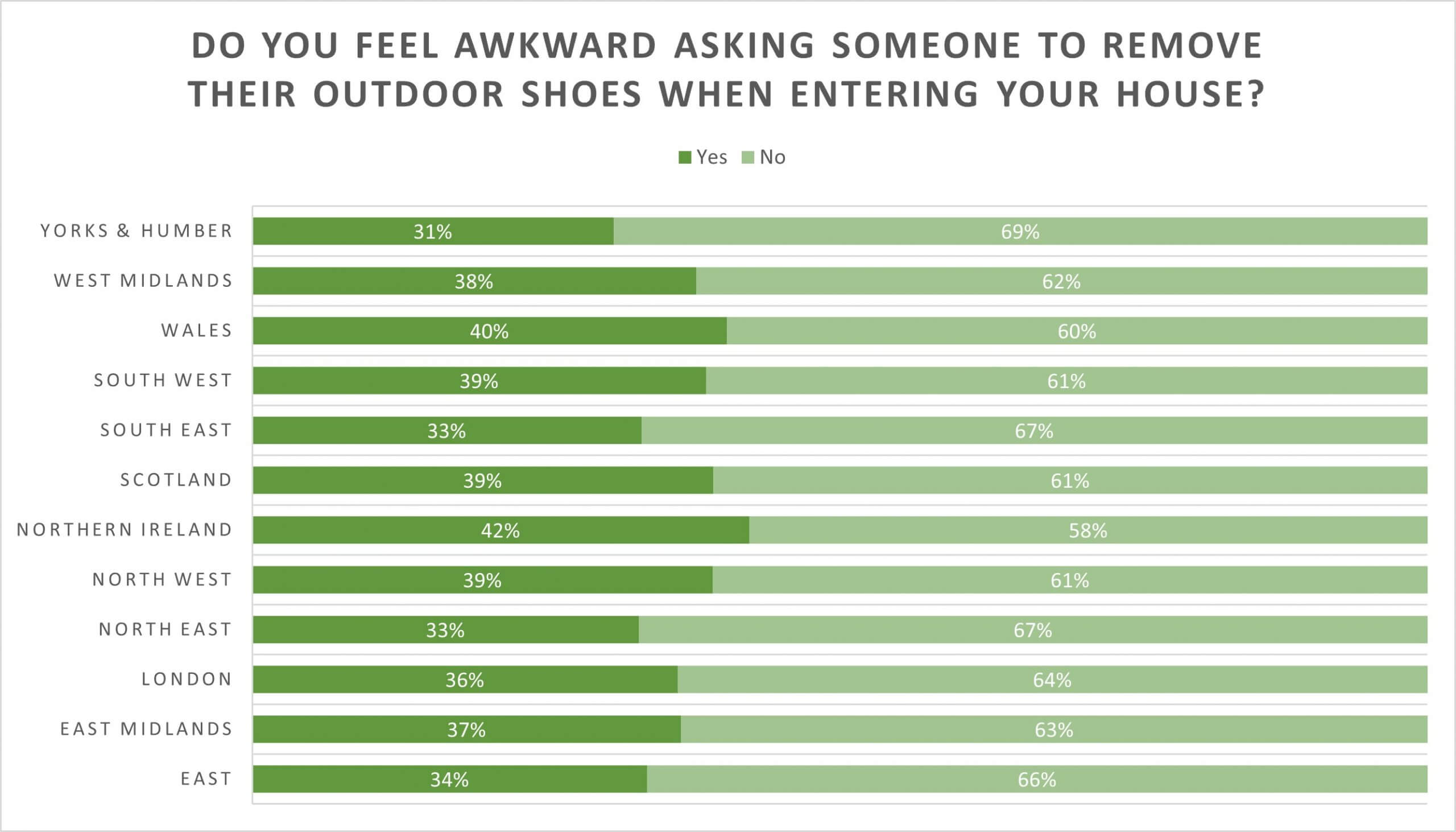 Do you feel awkward asking someone to remove their outdoor shoes when entering your house?

Adults in Northern Ireland are most likely to find the situation difficult, with 42% agreeing that they feel awkward asking someone to remove their footwear, followed by 40% of people in Wales and 39% of people in Scotland, the North West and South West.

Those in Yorkshire and the Humber are least likely to feel awkward with 69% of those questioned saying they would not feel awkward about it.